Spurs not Allowed to alter pitch size of Wembley Stadium

Tottenham Hotspur have been denied permission to reduce the dimensions of the national stadium pitch ahead of their temporary switch next season. 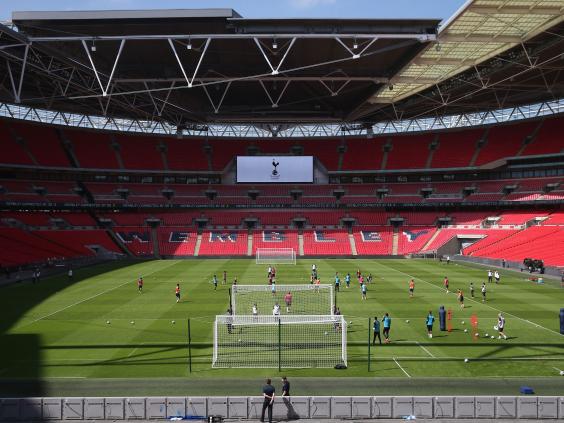 Spurs are currently construction their new stadium besides the White Hart Lane, and for this, they will have to adjust a full season at the Wembley.

Mauricio Pochettino’s side largely struggled to adapt to the Wembley atmosphere last term, and this resulted in a disastrous European campaign while they were also defeated by Chelsea at the semi-final stage of the FA Cup. The north London club got to know of their result following a meeting with the 20 Premier League chairmen, who declined the change.

The FA regulations are said to want a minimum dimension of 105 x 68, but Spurs were allowed to make use of their 100 x 67 White Hart Lane stadium as an exception – as the pitch could not be further extended. Spurs enjoyed an unbeaten run in the Premier League in their home patch, but their record was rather pale at Wembley where they won just one of their six outings.

The 105 x 68 dimension is likely to be made compulsory in their new stadium, and Spurs may have to adjust to the change at the Wembley first before switching to their new home ground in the 2018/19 season. The slight extension in width is likely to have an effect on the Spurs makeup, but Pochettino is likely to have this problem resolved with an extension training program in pre-season.

Spurs made an improvement on their third place finish a year ago to finish runners-up in the recently concluded campaign, and they will push for the Premier League title once again with Pochettino desperate to keep hold of his talented bunch of players. The likes of Eric Dier and Kyle Walker have been linked with proposed moves away from north London, but Spurs will be hoping to avoid any exits by placing hefty price tags.