SPURS TO GET NEW STADIUM NAME

Premier League side Tottenham Hotspur are set to get a new name for their new stadium, which would reportedly earn them £400 million in naming rights. Spurs are building their new football ground, which is set to be ready for the 2018/19 season. The new pitch is on the site of their current home White Hart Lane, meaning next season’s home matches would be played elsewhere – Wembley. 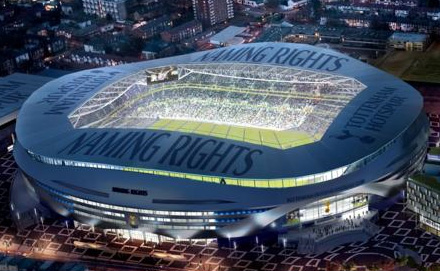 There are reports in England that Chair of the club Daniel Levy is plotting a deal that could see the club change its name from White Hart Lane in moves to get a finance deal for their new home. Rebranding the name of the old Spurs stadium to the sponsor’s would earn the club money that would go into financing it.

The club estimates that £750 million would be expended on the project – £350 million more than initial estimates. To get a big sponsorship deal to facilitate the project means they would have to sacrifice the old name. It has become common for Stadiums to get named, with it being such an obvious stream of revenue, and fans happy to see the money spent on players, or saving on the cost of tickets.

There have been other marketing moves to raise finance. After Wembley hosted American football, Spurs signed a deal that would allow for NFL games in the stadium. In the past, Arsenal got £100 million from Emirates to name the stadium after them while they sponsor the stadium for 15 years. The firm extended the deal to 2028 in 2012. Emirates paid £150 million for the rights and the branding rights on the club’s jerseys.

Chelsea are looking to renovate theirs but reports say they would not sell naming rights of Stamford Bridge. Other clubs are looking at extending their capacity due to the limits of the current one. Reports add that Liverpool also do not want to sell their naming rights, Manchester United too.